Just wanted to update to say that Orent has found his long-term home. He's been chosen (by a panel of experts!) to be a breeder... that's right, the CCI trainers said "Yes!" when asked if they'd like to train a whole room full of baby Orents. We always thought he was special, but it's nice to hear an unbiased panel agreed!

We've been in touch with his new breeder-caretaker, who seems as smitten as we were. We know he likes the weather out there better than in Philly, and we hope his new duties suit him well!
Posted by Max 2 comments:

I just found out a photo I took of Orent is up for CCI's holiday card photo. Whoever gets the most "likes" on Facebook wins! So far Orent's winning, but only by a bit. Help us land him a major deal in holiday card publishing by clicking this photo, then "liking" it on Facebook.

Two posts in less than 2 hours? How lucky are you!?!

Yea, we know, we have been bad puppy writers. But between a teenage dog, a new 7-year-old pomeranian, and buying a house (gasp!), we've been a teeny tiny bit busy. But now we have news!

But by far the best moment of the whole trip was when we got to ditch Orent for a day in the caring hands of Carol and Becca, who work at Max's Grandma's nursing home. Orent spent the day visiting with various older people who were in the Health Center for people who need more on-going care. It was a smashing success for Orent. I think it's best to just let our email update from Max's aunt tell the story:

A great day for all! Orent was a big hit - one lady who never seems to notice things or come out of her room came out twice to see him. They walked around and visited people in rooms, people were thrilled to pet him. Best part - he seemed to have special affinity for alzheimer's patients. One in particular walked with him often. Others just seemed to really enjoy his company. They were thrilled that he loved to put his head on their laps.

After lunch, he came in from his walk into the office and wanted to head up to your room - he remembered which room it was and headed to his crate for an hour and a half nap.

A number of the staff were really taken with the idea of the program. Carol Enfield looked up his blog and more about the program.  I think she would love to have a dog at the home.

Trouble the cat made sure that the residents didn't forget him. He marched around and made his presence known while Orent was being introduced and petted. Orent was unconcerned about Trouble.

All around, a successful road trip with the labrador. He only has 2 months and 2 weeks left with us before turn-in... it's amazing how time has flown!

More photos are up on Orent's Facebook page - Facebook.com/OrentII
Posted by Kaytee Riek No comments:

Orent & the gang have had a busy summer, but we promised stories from the Finger Lakes and pre-school, so we'll share some highlights. 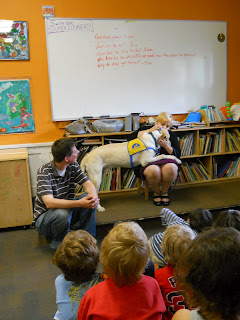 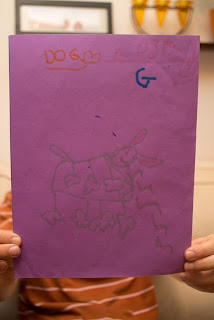 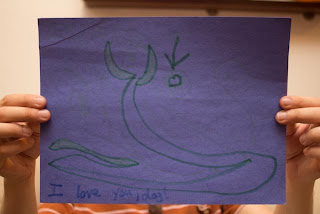 Posted by Max No comments:

Only a few minutes for a blog post. Hopefully more later about our epic 5-day trip to the Finger Lakes, with Orent and Brady in tow. But for now...
And a third bit, just because:

Posted by Kaytee Riek No comments:

On the road again

Orent came on a grand adventure with me today -- to New York City. I had a meeting w/ my boss in Brooklyn, and she's always wanted to meet Orent, so I decided I'd drive and bring him with me.

Orent's been to NYC before, but both times were with a 2nd person to help with doggy socialization. NYC is a scary place for dogs. I mean, the strollers alone are so big, they could crush a small buffalo!

Before we could start our journey, we had to get the car tuned up. Orent came with me to the repair shop (without a vest, because I'd forgotten it, but it was all good with the folks there). He was super patient while all the smells and sounds swirled around him. I was so proud!

With the car tuned up, we set out on the road. At first, he was a dog who couldn't settle down. That probably stemmed from me having to slam my breaks and him sliding off the seat -- he was belted in, but still! -- and onto the floor. He didn't want to lay down after that shocking experience.

So I gave up getting him to lie down, and just drove. We hit some traffic, and every hard break from then on caused him to wake up and stand up. Poor dog... but I'm sure he'll get over it.

In NYC, we expertly navigated the moms and babies, guys on bikes, construction workers, and the like. We didn't do such a good job navigating puddles. Orent wanted to drink the water so bad! But we persevered, and made it to my boss's apartment.

Orent had a hard time settling down, and we all were hungry, so we figured we'd get lunch at a Yemeni restaurant below her apartment (yep, Yemeni... it was amazingly good!). Shockingly, after a few failed attempts to get my attention, Orent laid down and fell asleep for almost our entire two-hour lunch meeting.

After the meeting, we headed back to the car. One thing Brooklyn lacks is places for dogs to pee! All of their trees are fenced in where we were, so there weren't even little bits of dirt to pee on. So I tried to put the dog between two parked and said "hurry". You won't believe what Orent did! He jumped up over the curb, over the 1' tall fence around the tree, and started peeing next to the tree. But what could I do? I was actually pretty proud of him for jumping, since he's been such a wimp about that of late. And besides... fenced-off trees are dumb. Orent clearly recognized that and decided some rules are just made to be broken!

On the drive home, we stopped and went into a NJ rest stop (the very same one where we took this photo when he was a brand new little squish-face). Those places bustle with seventeen million people at all times of day, so I figured it'd be a good place for Orent to get some socialization. Also, I needed coffee and I certainly wasn't abandoning him in the car. Nothing much to report from this socialization... mostly I'm just documenting it so I remember to include it in the puppy report.

We hit some pretty bad traffic on the way home, but Orent, as usual, was cool as a cucumber... even at 6pm (dinner time!).

Maybe we'll take more "just us" road trips in the future since this one went so well. I still can't believe how relaxed he is about the world. It's actually kind of freaky!

Woof is for Weekend!

Hi guys, it's Orent again. Learning to speak and then to blog is really fun! I can tell you all about my weekend because my humans have really been slacking on their blogging.

Yesterday I got to go run with my friend Buddy and play in his pool. I pretty much thought that was the best day a guy could have, but then! We went to see the ocean again. Every time we go I like it more and more. This time, I didn't feel silly when the sand tickled my toes, and I wasn't scared to go into the ocean... at least, I wasn't scared when it didn't get my belly. Then I got cold and yeah, maybe a little nervous.
But I liked chasing my squeaky tennis ball and my new brother and jumping over the waves into the surf. I liked being on a long leash so Brady could chase me, and I really liked when Max took his socks off so I could grab one. Well, I didn't like being told "Don't! Drop!" after that... socks are so soft and smell so good, why can't I chew them?

Anyway, back to the beach. You'll never guess what happened next! There were cars on the beach! Big ones with big wheels. Even if you'd said "jump!" I couldn't have jumped into them, the wheels were taller than Max. A whole lot of them drove on the beach and then there was a big bonfire.

There were lots and lots of small humans there and some of them petted me. They said I was a good dog and they laughed because I'm only 1 year old and Brady is 7 but he's a lot smaller than me! Some of them were about Brady's age, and they thought it was cool that they were older than me. I thought it was cool that they scratched my ears and rubbed my belly! I was good, too, and held my "sit" almost the whole time! And there were other puppies there but I ignored them... the kids were more fun.


When we got back in the car for the hour-long ride home, I was so tired I fell right to sleep. Max says I fell asleep while I was climbing into the car, but I think he's exaggerating. Who's writing this blog anyway, buddy?!? Brady says I even slept through the tuna hoagies they ate (in the car) for dinner and missed out on the dropped tuna. I wouldn't have eaten it anyway, I told Brady. He rolled his eyes and said, "yeah, just like it wasn't you who ate the cat's lunch (twice) and my dinner and breakfast this week?" Again, whose blog is this, guys?!? Mine!

Yeah, getting to go swim with Buddy and in the ocean all in one day was awesome. I paid the price the next day I guess. The humans said "bathtime" and we went to the PetCo in New Jersey where I got a shower. I don't like those. I wasn't scared of the slippery ramp (yay me!!!) but I still DO NOT LIKE having the water sprayed on me. It makes me grab for my cookies and try to back away and generally act unhappy. I tried something new when the cookies weren't coming fast enough... speaking for them. It did NOT work. They people said "DON'T" and I did not get cookies. Why do I sometimes get cookies for speaking and sometimes not? Being 1-years-old is hard work...

Thanks for reading my blog! If you have a chance to talk to my humans, can you tell them that I promise to be better and not eat Brady's food or the cat's food or go into the recycling bin looking for cardboard if they promise not to get gates for the hallway... I like my freedom, and I'll try not to abuse it any more... it's just those things smell so good and taste so good and are so fun to play with... hey, did you refill the cat bowl? Yummy! Oh! Sorry... maybe those gates are a good idea.
Posted by Max No comments:

This is Orent. He's a yellow lab/retriever mix that Max and Kaytee raised to be a breeder dog for Canine Companions for Independence. Max, and sometimes Kaytee, told all kinds of crazy Orent stories through this blog, while we learned how to raise a puppy and train it to be a future service dog of America!